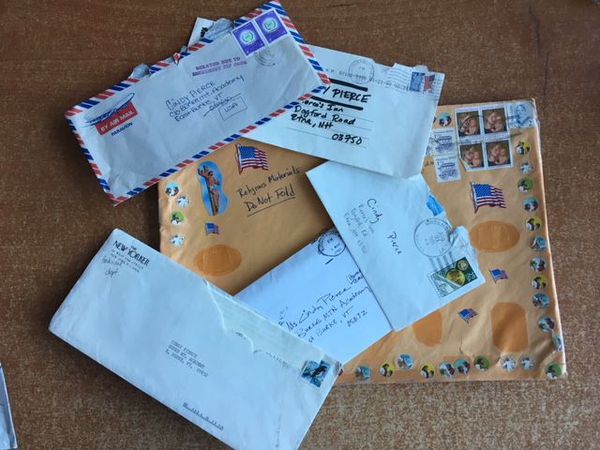 Letters from interesting and faraway places

Too many young people are overwhelmed, anxious and exhausted by life. Some describe feeling as if life has already passed them by. Others fret about the possibility of being alone without a partner. Many are concerned that they don’t feel passionate about work. The normal struggles of life seem to make people increasingly fragile. Social media has contributed to a comparison-frenzy that seems to override the universal understanding that friends post the bright side or exaggerated versions of their lives.

The bar for happiness is unrealistically high based on a perception fueled by social media. People don’t have to go far to find another reminder of what they could be, should be or would be if they had bought, done or engaged in anything they see posted or blasted on some social media platform by marketers, friends or random people who collect followers.

I hear young people talk about how everyone else seems to be having the time of their lives while they feel as if they are slogging along, therefore feel anxious and alone. The pressure to feel passionate about one’s job is particularly alarming to me. It is called work because it is a hassle that requires effort, a sacrifice of leisure and resilience.

Feelings of inadequacy among young people have increased, however, the general wonderings and wanderings of people in their twenties and thirties seem the same as they ever were. When communication devices were cumbersome and screenless, teenagers rarely had contact with more than a few people unless we were at school. We were all bumbling around feeling moderately decent about ourselves with faces full of acne and zero knowledge about what our best friend had for breakfast or dinner. We were not even aware of our unfortunate fashion choices until we received feedback at school and had to ride the day out anyway. In our twenties, we moved to larger college communities or random towns where we worked. Being somewhat anonymous created more freedom to dress, act and be who we wanted to be. The only profile or brand we had was how we presented in person each day.

I have spent the last few months reading through handwritten letters I received from my pals during the 1990s. My overall impression of these letters is that being in one’s 20s and 30s was never easy, even before cell phones, Tinder and social media. All of my friends wrote about angst, loneliness, job challenges, horrible living situations and relationships they were hoping for or running from. Several of them described their angst as “looking for something to grasp” or “more passion in their work.” They often were unhappy despite living in an exotic, coveted location.

One friend’s letter opened with, “I am unemployed, uninsured, no hope of a boyfriend, looking for an apartment and have a knee injury. I am screwed” Despite the grim situation, she went on to tell stories filled with hope and humor. Her dating stories were a riot. The letters I received from her over the following months were sprinkled with better news; she wrote about a new job, a halfway decent guy she was dating and an interesting roommate in a grungy apartment with a long commute. Things went from really bad to pretty solid in a matter of months.

Another friend talked about how lonely it was to live in a city and how much he missed having so many close, great friends nearby the way he did in college. He longed to date a person with similar interests and values. He had a job, but the future of that job was uncertain. His sadness was palpable in several consecutive letters. A year later, his letters were full of great news; he had found the ultimate job and a great girlfriend. City life was suddenly more tolerable.

A third friend wrote letters filled with such great stories that I am sorting them to save for her kids. She had a series of short-term jobs that moved her to various corners of the US to work with new groups of people who were all characters. Despite numerous paragraphs reflecting serious doubts about finding her path in life and wondering if she would ever meet a great guy who loved her authentic self, her stories were hilarious.

When she finally settled in the Midwest, her dating life became a series of calamities. One guy was totally self-absorbed but also incredibly hot. Another guy described a series of his gay fantasies on the date but insisted on his heterosexuality. She spent the date counseling him to acknowledge that he was at least bisexual if not gay. While she would normally go Dutch on a date, she gladly let him pay for the three-hour counseling session, and soon after he thanked her for encouraging him to be his true self.

On a movie date with a French guy, they emerged from the movie theater late at night in a sketchy part of a city to discover that her car had been stolen. His French accent thickened as he unraveled with escalating fear and confusion. She tapped into her clear-headed focus, locked in her survival skills and took care of business with only a payphone at her disposal. The unexpected emergency situation highlighted some of his glitchy features and confirmed that it would be their last date.

Many letters from one friend indicated that he was questioning his sexual orientation but found it impossible to acknowledge among his macho friends. The postcards and decorated envelopes he sent regularly to me while living at my parents’ house were outrageously inappropriate and unsettling for my very clean-cut dad. He sent postcards from Utah with phallic and vulva-like rock formations. He decorated the envelopes of his letters with naughty cutouts from pornographic magazines indicating that gay porn magazines graced his mailbox regularly. The contents of the letters were reflections of his creativity, humor, brilliance and confusion. When I insisted he spare my parents the brigade of phallic images and blatant references, he responded with a whopper of a Christmas gift.

The large envelope was covered in American flag stickers and religious-themed stickers. In bold letters, it read, “DO NOT BEND. RELIGIOUS MATERIAL ENCLOSED.” It was an Advent Calendar with a picture of the manger, the wise men, and Joseph and Mary looking over Baby Jesus. When I opened the door on each day, there would be a raunchy, horrifying mini-cutout from his porn collection. Unimaginably-sized body parts and positions were featured right behind the door of a wise man’s shoulder, a box of frankincense or a shank of a donkey, Eventually, this clever man with more brain space than the average cat found a wonderful husband and is living happily ever after.

All of my friends who wrote these letters landed solidly on their feet despite some wonky twists in the road. Each of them found love and heartbreak over the years. Every one of them had some snoozy jobs that led to better, more enjoyable ones. They also endured odd apartments in strange places and met a lot of interesting people along the way. Generally, if a couple of pieces of the puzzle were in place, people could endure the absence of a relationship, an uninspiring job, disconnection from friends and family or an unpleasant town.

Finding one’s way over many years is common. The challenges we all experienced were part of the process of finding the place where we wanted to be, the jobs that made more sense than the last one, and the people with whom we wanted to spend time. Even though we are all in our fifties and sixties now, each of us would say that the process of finding our way is ongoing.

We no longer keep hard copies of letters. The current volume of communication online is so overwhelming that people rarely print or save anything. The mundane but juicy background that provides context for a person’s experience doesn’t seem to be captured in emails, texts, snaps, tweets, posts or comments. Without clear and accessible evidence, I wonder how people will accurately assess their own growth over time. Things move down and out of reach on feeds, stored documents get lost or deleted, and saved photos usually capture only the best moments, which can fuel anxiety.

A message for my younger friends and relatives: Saddle up for some challenging hurdles without missing the short stretches of ease between them. Embrace each of your formative experiences because they are shaping the next stages of life. Put energy into the moments you are in now rather than pine for what you think life should be serving up. Make an effort to connect with the people with whom you live, work and spend time. Pay attention during action-packed phases as well as the slow, rambling stretches of time. Be in each day with an open heart and don’t miss the gifts that hide in the weeds.