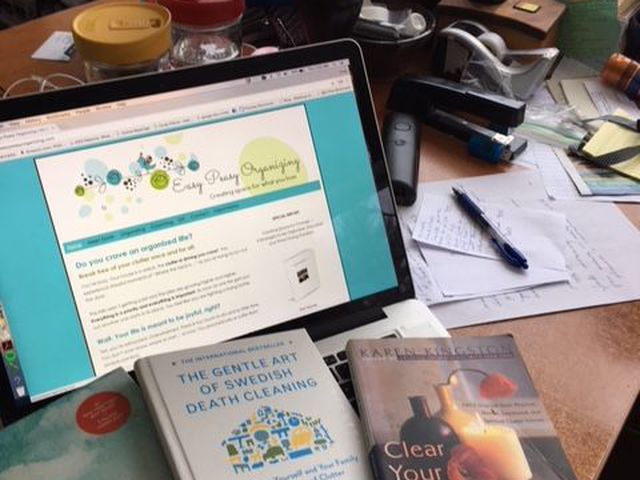 All my clutter guides on my cluttered desk - better get cracking!

All my clutter guides on my cluttered desk – better get cracking!

A couple of times a year, I get motivated to organize at least one zone of our house. I am usually inspired after a reread of Clear Your Clutter With Feng Shui by Karen Kingston. I never tire of Kingston’s straightforward and humorous approach. I engage Bruce in my efforts by reading segments to him while he drinks coffee. Guilt inspires mini-bursts of his efforts to simplify and purge. Even though it is an uphill battle at our house, Kingston’s guidance gets the ball rolling. My nephew used to joke that whenever he visited, the clearing clutter book had been moved to a different pile of crap in our office. Advertisement:

The combination of my nostalgic tendencies and righteous imperfectionism inspires me to put energy toward other things rather than slaying clutter. I prioritize time with family, friends, exercise and work, but I also waste a solid amount of time bantering on email or watching chimp videos on Facebook.

The family section of Pierce’s Inn (our home) is the appendix of Pierce’s Inn. We move through that space with survival blinders, stepping over the family gear and temporary storage. I am a contributor to our clutter situation but not the leader of the pack. Three athletic kids and a husband with his own flavor of hoarding and nostalgic tendencies fuel our disorganization.

When I started to notice that the stuff was impairing my work and flow, I hired an organizer. My friend Sarah Dole, creator of Easy Peasy Organizing, helped me do a major purge of multiple rooms. Sarah describes clutter as “unmade decisions.” When I thank Sarah for changing our lives, she reminds me that she simply lights the spark, and we are the ones who take action to get control of our stuff.

Bruce hoped I would learn everything from Sarah and guide him to clean his overstuffed office corner. I knew I could be blamed as the naggy wife who projected my standards on him and bossed him into getting rid of his sacred items. Witnessing Sarah’s approach with me during a couple of sessions opened him to the idea of digging into decades of collected/hoarded items with Sarah as his guide.

The emotional process of letting go of our stuff led to some dark, challenging moments, but without judging, scolding or projecting her own ideas on us, Sarah’s intuitive approach and patience helped is both get out of our own way. She asked great questions and nudged us along to see things from various perspectives: “How does this item fit in your life right now? How important is it, really? What challenges does this clutter create in your relationships? How many steps does it take to get what you need?” Thanks to Sarah, my copy of Clearing Clutter With Feng Shui is now on the bookshelf with other loved books.

When I stormed by age fifty, I decided to step up my clutter-clearing game. Even though I don’t identify as “tidy,” The Life-Changing Magic of Tidying Up by Marie Kondo expanded my ability to toss, give away and store many clothes and trinkets. Even though our bedroom is still a clutter-fest, I fold my shirts and underwear to display them in all their tidy glory. These days, I know my inventory, I wear more of my clothes, shed clothes that don’t inspire and feel joy when I open my drawers.

Kondo has one philosophical tidbit that I find to be ridiculously awesome. She suggests that socks should not be balled up in a drawer because they work hard enough during the day; I do a little fold/roll to let them rest neatly. Bruce thinks I leave my drawers open a little longer than needed to gloat.

Recently, my friend Pennie (born with a strong tidy gene) sent out an interesting link about The Gentle Art of Swedish Death Cleaning by Margareta Magnusson. Her approach reminds us that if we don’t get rid of our stuff before we die (or get too drifty or become physically incapable to sort through our stuff), our kids will be sentenced to the task of weeding through all of our crap. In Magnusson’s words, “Stuff that your family and friends can’t evaluate or take care of.” When Bruce and I took over Pierce’s Inn, we inherited decades of family clutter. This death-cleaning concept rebooted my decluttering focus.

My parents moved into a smaller house on Pierce’s Inn property when Bruce and I moved in. My sisters helped us move, weed through and shed a bunch of my parents’ stuff. At one point, my dad insisted I leave two big boxes within our reach on the office shelves. He defiantly claimed the boxes were filled with, “Absolutely essential items to keep Pierce’s Inn running.” After he left, we opened the boxes and discovered they were filled to the brim with copies of SailMagazine and Yachting Magazine from the late 1980s.

Big Reg was ready to retire, but the transition was full of conflicting emotions. He staked his claim of space and hoped to hold onto his past hobbies by having me host his clutter. We respectfully kept those boxes for a couple of months and then moved them along. He never asked or noticed. Bruce and I shook our heads at his hoarding tendencies as we moved in and continued to collect our own versions of those boxes of magazines.

Every morning I pull an Angel Card from a little clay container on my bureau for inspiration. The word on the card becomes my mantra for the day. Some examples include: “PEACE,” “PATIENCE,” and “SURRENDER.” On day two of Bruce’s office cleaning I read my Angel Card: BALANCE. Bruce said, “I like that word. I will live by that one today, too.” I insisted he picks his own card. He took in a sharp breath of horror as he read the word “EFFICIENCY” on his card. He handed it back to me and mumbled, “I don’t like that one. I will pick another.” It is safe to assume our kids will have a lot of clutter to clear in a few decades, and it won’t be easy-peasy.