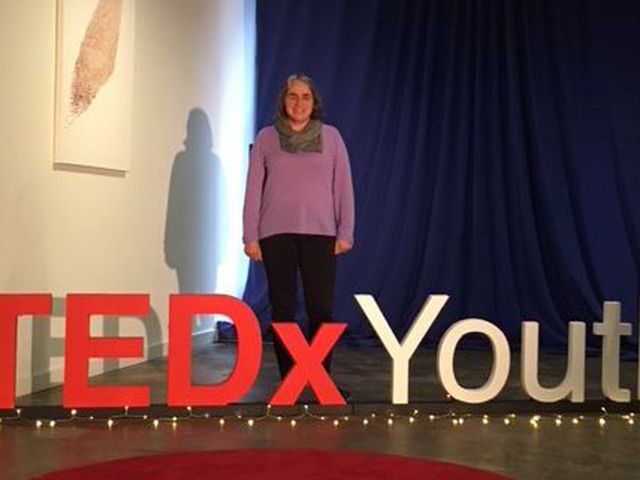 The world I hope for is filled with young people who ignore unfair and unspoken social rules and find the social courage to speak up for themselves and speak up for others as engaged bystanders. Gaining conviction in our values and beliefs is a first step in building Social Courage. People go along hoping, even expecting that social courage will eventually just land on them. In reality, building social courage is a practice of listening to your heart, questioning norms and, at times, enduring some painfully awkward moments.

If we are willing to dive into awkward soup, swim to the other side and shake ourselves off, we then realize we survived and gain another layer of social courage.

We are all complicated, multi-dimensional people, but social media rarely captures all of those dimensions. Even though we all know that many people cultivate their image on social media – sometimes it is fully fabricated or slightly exaggerated, but most often people highlight the amazing aspects of their lives. It is stressful when reality doesn’t align with what you project. And it makes you feel inadequate when you compare yourself to others even though you know you are only seeing the bright side of people’s lives. It takes Social Courage to project one’s true self without obsessing about how people will react or if they will react at all.

It can be annoying to navigate friends who seek validation through Social Media. For someone who is desperate for praise, it seems impossible for them to be satisfied by dozens of likes and comments. Sexy photos beg for responses such as; “hot” “Gorg” “So cute” “Goals” “I hate you. heart heart heart heart” Sometimes a friend finds you at school and demands to know why you didn’t comment on a post or at least like it. Keeping the praise junkies fed can be a full-time job.

By finding balance in how we engage with our devices, we can stay grounded and cultivate healthy relationships. The array of popular social media apps enables people to avoid Social Courage. With peers as the only referees on social media, microaggressions tend to be tolerated; people feel free to express homophobic, racist, transphobic and misogynistic comments. For many, these are the most important situations to show Social Courage.

Social Courage is not about being an extrovert. We have all witnessed moments when our introverted friends who speak up in a way that time seems to stop for us to soak up the wisdom bomb. Putting aside the fear of rejection or exclusion to let people know when they are offensive – in person may seem too challenging at first, but it is worth aiming for. Even speaking up online when someone is disrespectful is a good start to practicing Social Courage.

Harassment and bullying certainly occur on Social media, but subtle forms of harshness are much more common. There are a lot of snarky comments, underhanded jabs and even really mean comments followed by, “Just kidding.” Kids tell me about suddenly being excluded from a group chat, assuming they did not comply with some unspoken expectations of the group. The emotional distance and safety of social media can delay the development of Social Courage because people can avoid being held accountable for what they put out there. If you courageously confront someone who is disrespectful, there is certainly a risk of being blasted with negative responses. Letting it pass, however, can feel unsettling, so dive in and swim to the other side of that awkward soup. It will get easier.

In order to tap into our own social courage, it helps to take notice and witness others who demonstrate it. With positive models of social courage, we can start to formulate our own plan about where we might start practicing it. Take a moment right now and think of a situation and someone you know who showed social courage. How did people react? What did it look like? Sound like? What did it feel like to witness that?

I had the good fortune of being marinated in Social Courage growing up as the youngest of seven kids with parents and siblings who were righteous nonconformists. This clan of fashion enemies made cringe-worthy moments a regular occurrence. Occasionally, I would ask my parents to attempt to blend in just a little. My father had no patience for such nonsense. He once responded, “Too many people in the world blend and behave. Find the courage to be your own person.”

My mother was no slouch in this realm. She never hesitated to speak up if she witnessed any level of injustice. Even if someone stole her parking spot at the grocery store, she would put the car in park, walk right over and calmly ask the driver to back on out, and it would happen. My sister and I would be crouched in the back seat horrified. On the way home, we would pepper her with feedback on how the situation might have been handled differently. With a wave of her hand, my mom would say, “Don’t be ridiculous, girls. What would happen to that guy if no one made him aware of his rudeness? And besides, being embarrassed is good for the soul.”

Part of my Social Courage training included reminders that nice and polite people can also be assertive and even fierce when someone pushes their boundaries. In high school, I spoke up about small matters as I realized what was most important to me. In college, I grew more comfortable speaking up about bigger and more meaningful issues. When people made disparaging comments about women, I spoke up despite the attempts to keep me quiet. Some people challenged me by saying, “What… are you some kind of feminist” in a tone intended to make me retreat. I would assert that I was indeed a feminist as we should all be. If my lack of compliance offended them, it would confirm that my natural social filters were working quite well in filtering out the riff-raff. Figure out what offends you or even bugs you online and off, and start speaking up. If someone doesn’t want to be around you because you are speaking your truth, trust your repellents.

Once you start building social courage, the next step is to help reinforce it in your communities. What if more people supported others who demonstrated social courage? What if it was a norm to hold others accountable for online cruelty? What if people felt fully encouraged to be their authentic selves – online and off? It is up to each of us to recognize, build, practice and spread social courage. The world I hope for is a place where it becomes second nature for you to muster Social Courage to speak up for what matters and for what you know is right.