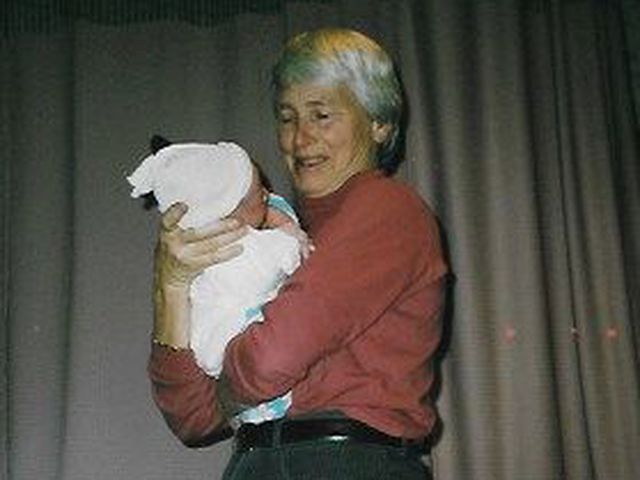 Oma and with newborn Colter

Jenepher Lingelbach was one of the most loving, compassionate people I have known. When I married her son Bruce, it was clear that I hit the mother-in-law jackpot. I feel so grateful to have known this true wonder woman.

People who met Jenepher once and people who knew her for years appreciated her warm, genuine way of connecting. Family, friends and acquaintances have been touched by her wisdom. Jenepher always asked questions that helped shift one’s perspective. She spread joy with her wonderful sense of humor and hearty laugh. Most of all, Jenepher had a way of gently encouraging us all to pay attention to the beauty all around us each day.

Jenepher’s naughty streak was healthy and hilarious even in her last years. There was never a need to filter thoughts in conversations with her. Expectations of “appropriate behavior” inspired Jenepher’s rebellious nature. During one of my first visits to East Barnard, I sat down on the couch and crossed my legs. Oma’s Vizsla dog named Piri tiptoed over to me on her bony legs. As I was trying to make sense of Piri’s oddly, longing expression, that dog suddenly mounted my foot, clutched her bony paws around my lower leg and gave a jackhammer style hump that made even me blush. Jenepher hooted with laughter and told me that was Piri’s way of welcoming me to the family. It was clear that no topic was off-limits after that.

Jenepher spread light in the world with unconditional love, kindness and generosity. She inspired others by courageously opening her heart and seeking personal growth. Jenepher was the first person to explain to me that meditation is about the practice of returning to the breath or the present moment despite the distraction of a scattered mind or the temptation to sleep. Her honest, realistic and refreshing approach encouraged us to keep meditating and embrace imperfection.

Spending time in nature with Jenepher was always an adventure. It was as if she pulled back a curtain to help us notice the details of a leaf, clouds, tracks in the snow or the trill of certain birds. When our children started to walk, Jenepher (aka Oma) engaged them in nature walks in a way that helped us all to slow down and notice even more. When our teenagers seek moments to be silent and alone in nature, we are reminded of Oma’s spirit.

The rolling fields in East Barnard have been a favorite winter sledding spot for our kids since they were toddlers. Our oldest son, Zander was particularly inclined to pause and soak up the beauty. One time when he was about five, everyone was waiting for their turn and for him to get off the track after his sled ride. But he just sat. Bruce called down to remind him to move off the track. When he didn’t respond, Bruce asked what he was doing. After a long moment, Zander pensively replied, “I am looking at my sled.” At first, everyone was annoyed and slightly amused. Then an appreciation for his ability to just sit and gaze at all the wonder around him helped them overlook his pesky behavior. Of course, Oma found this story absolutely hilarious; she appreciated both his defiance and his ability to be present in the moment.

Oma’s naturalist ways were most evident around the holidays. She consciously avoided adding to the landfill by reusing wrapping paper year after year and aimed to give gifts that didn’t add to our kids’ piles of “stuff.” Our daughter Sadie is a reflection of her Oma in that she has been an explorer of nature from the get-go. Sadie’s birthday is on Christmas Day. Years ago, Oma gave her a homemade nature kit created out of an old camera case filled with some lightly used supplies: a magnifying glass, empty film canisters for collecting specimens, some netting and a compass. She also stashed some bandaids and tissues (unused) in the pocket of the case. Oma’s thoughtfulness and personal touch in her gift delighted Sadie more than any other gift that day. Sadie still has her nature kit. When she brought it out to show me, she found a larger specimen container that she and Oma had created out of a toilet paper roll, a juice top, a rubber band and a piece of netting. Oma lit the spark of ingenuity in our wee lass that continues to grow.

We were so honored to have Oma join us for the birth Colter on a cold January night. When labor began, we called her on the phone to tell her we were heading to the hospital. It brought tears to my eyes when she responded by singing a verse of a song she had written for the baby:

“Baby, baby, you’ll come soon
Baby, baby, I’ll show you the moon
Show you the shadows on the new fallen snow.
Hold you tight and rock you slow
Oh Baby.”

During hours of labor at the hospital, Jenepher’s calm energy set a relaxing tone in the room. After Colter was born and swaddled, she held him and sang another verse of her song:

“Baby, baby, stretching so tall
Baby, baby, you’re still so small
Look around with open eyes
So much to learn and yet so wise
Oh Baby.”

And she kept her promise to Colter and to all of us by reminding us to really see the moon and the shadows on the new-fallen snow. We continue to look around with open eyes because Oma lit that fire in her own children, her grandchildren and all of us who are lucky enough to spend time with her.