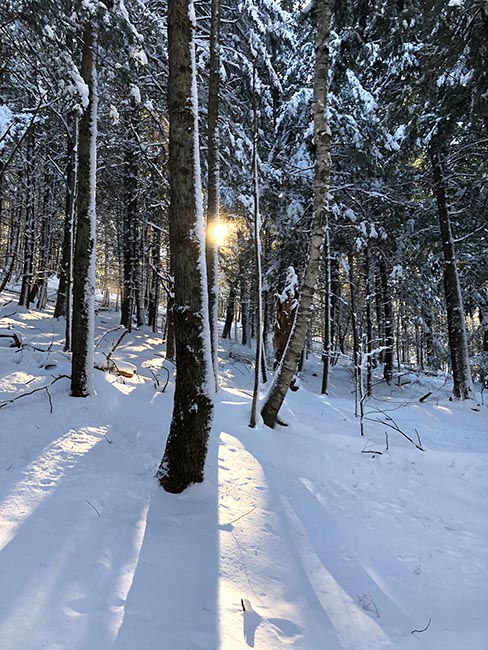 Until my mother died at ninety-three years old, she maintained a deep connection to God. She always had a serene look on her face on our way back to the car after church. For me, sitting through church and religion class made me feel naughty for swearing, fighting with my sister, being mean to peers and not paying attention during the service. Our mom required all seven of us to attend church until we reached age twelve, when we could decide for ourselves. Getting up at the crack of dawn to attend ski races every Sunday was a convenient excuse to miss church.

I felt like a bit of a heathen, but riding the J-bar at Oak Hill in Hanover, N.H., as a kid instilled in me feelings of awe and peace that are with me to this day. I welcomed any weather with the lowest temperatures and the highest winds to enjoy swishing through the gates, goofing off on the lift and being a lodge rat with the rest of the Ford Sayre Ski Racing Team.

During our midweek training at Oak Hill, I experienced many peaceful, sublime moments, even as a young kid. The only time my teammates, coaches or friends’ parents ever thought of me in any state of peace was when I fell asleep in the backseat of their car after practice. Most of the time I was moving in full-throttle at ski practice after school on Tuesdays, Wednesdays and Thursdays. I’d be running my mouth, clomping around the parking lot in ski boots, training gates, dancing in the lift line or riding the single J-Bar while hooting and hollering to my pals riding in front or behind me.

Bolting out of the Maurer’s or the Cummings’s car, we were full of gusto for afternoon training. I would launch off the J-Bar at the top of the hill and banter with my pals while skiing down to the starting area of our training course. Sometimes we’d argue with the boys, calling them chauvinists as we pushed by them to go first. I cringe to think of the kind, friendly fellas who endured our undeserved lashings, but most of us have worked through it over the years. 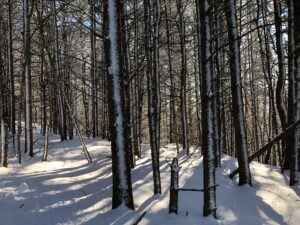 While skiing the course, I managed to maintain four or five unrelated thoughts, lasting for a few gates each. Even young ski racers are usually capable of focusing on improving at least one thing during a training run such as line (taking a faster path down the course) or staying balanced over their skis. Since I had the attention span of a flea, my runs were spent pondering the wet cotton sock rolled up in my boot; wondering what I missed on the TV show, Bewitched; the long list of cute boys I hoped to marry one day; and the delicious Ring Ding I packed for after practice. It was clear that the coaches knew I wasn’t focused on technique, but I couldn’t even explain when they asked me what I thought about as I skied the course. I felt a little guilty for not making the most of training, but it wouldn’t last long as I zoomed off for the next run.

The lift line was where the action was most glorious. We socialized without any responsibilities beyond waiting. My crew did a lot of goofing, squawking, laughing and grief slinging, adding to the din. Trading skis was a big source of entertainment for us but irritated the older, more serious racers. I was a positive, joyful kid as well as a high-energy nuisance and the source of much mischief.

Bob and Harry Sanborn were in charge of loading people on the J-Bar; they knew how to bring the pulse down on our antics by putting adults between us on the lift. Because the J-Bar was a sedate ride up, it forced me to be in my own head. My mind would slow down, and I noticed the beauty around me. By the second tower, I let go of the urgency to get back to my usual nonsense or training. The pine forest on both sides of the J-Bar enchanted me, especially with the glow of the afternoon light on the bark and needles way up high. Time seemed to stop. With my poles wedged between my toes and bindings, I would rest my arms on the grips of my poles and pay attention. When my body wasn’t moving and my mouth wasn’t running, I would normally fall asleep. But I had to stay awake on the lift. So, for a rare stretch on the unhurried ride up, I was present and at peace.

It turns out nature is my church. Over the last four decades, I have built up to a regular meditation practice, which includes recalling serene moments and beautiful sights from as far back as I can remember. Images of the pine forest at Oak Hill are indelible and still evoke feelings of peace. When I snowshoe up the hill behind Pierce’s Inn, I am often stopped in my tracks, marveling at the afternoon light on the pine trees, which remind me to be present and pay attention to the beauty all around.

Long before I grew up at Pierce’s Inn, the hill behind the house was named Lord’s Hill. As a church dropout, I struggled for years with the name. Our own kids have been raised in the United Church of Nature. Jesus gets some press in our family as a wise prophet, among other prophets, who led many people to deepen their faith and spread goodness in the world.

LT is one of our dear and wise pals. My husband, Bruce coached her when she raced on the Dartmouth Ski Team. In a recent conversation about the names we use for what we know as a higher power, LT connected the dots. She teaches her own children that people align with Divine Power in many different ways. LT calls it G.U.S. – God, Universe and Spirit. I dare say I am a true believer. G.U.S. has been with me all along, from the J Bar at Oak Hill all the way to our own hill behind our house when the light is just right. 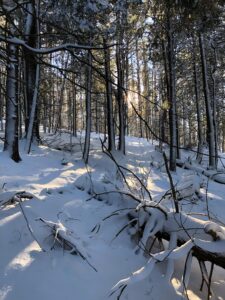 9 thoughts on “Big Pines in the Afternoon Light”