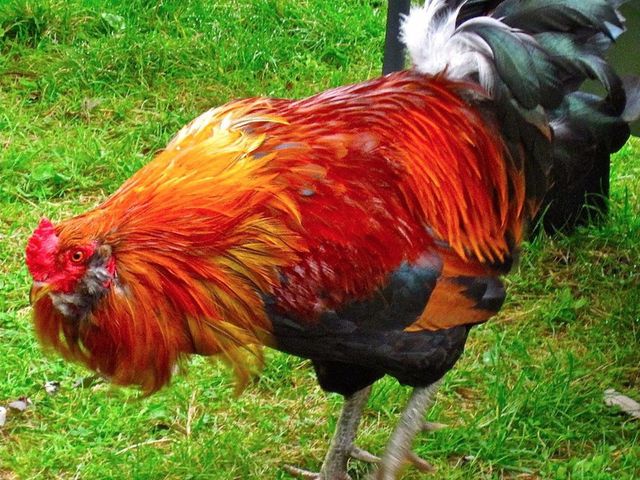 A Family Held Captive by a Kid and a Rooster

For years, my older siblings teased my dad about the time when his eleven-year-old kid and her rooster took over the family. I was persistent about my dream of owning chickens, and my dad had a weak spot for animals and a good deal. He went out to buy dog food and came home with a twenty-five-pound bag of chicken feed that included a free dozen “laying hens.”

Every one of those chicks grew up to be a rooster. Several farmers suggested we put them out of their misery. The idea of such cruelty inspired a new level of animal rights in me. My father waffled under my stamina and let me keep them all. He whipped together a shoddy coop at ground level and used a staple gun to fasten the chicken wire across the front. That may have been intentional.

A few days later, our friend’s dog jumped out of the car, wrangled himself through the wire and killed a couple of my precious roosters. After the elaborate burial ceremony, I was still devastated but even more determined to protect my flock. When I badgered my dad to make the coop safer, he reinforced the wire using the staple gun.

A week later, we returned from town to find seven chicken carcasses splayed across the lawn, legs and necks bent at funky angles and blood-streaked across their white feathers. It was like a Far Side cartoon. The neighbor’s dog skulked back home with feathers hanging out of her mouth. I dropped to the ground in tears. My mom chuckled under her breath and said, “For Pete’s sake Cindy, don’t be ridiculous. What good are a bunch of roosters that don’t lay eggs?!” She obviously viewed the slaughter as progress.

We decided to move the roosters from their little appetizer tray of a coop to a safer storage shed. My dad felt bad enough to buy five full-grown laying hens from Dean Croall, the local farmer. The hens were laying eggs within days despite the presence of three tweaked roosters in the coop.

Preoccupied with the need to figure out the pecking order, those three roosters spent a lot of time fighting. My mom didn’t pester me about my roosters as long as the hens kept laying eggs. Fresh eggs quelled the irritation of guests who were awoken by crowing roosters at 4:45 AM.

Harmony in the coop and our family was short-lived. The three roosters grew to be massive and increasingly more violent. While two were sparring viciously, the other one would leap up and scratch me and peck any open piece of flesh. Sometime when I stepped in the coop, all three would come at me in a rage of slashing talons and beaks. Dean Croall had warned us that more than one rooster would be trouble.

One day, I was devastated to discover that one of the roosters had been pecked to death by the other two. My increasingly anxious dad suggested we get rid of the other two scary roosters, but I dug my heels in. Before I was done grieving the loss of the first nasty rooster, another one died of the same fate. It was apparent that my animal rights effort had ended up as a cannibalistic cock-fighting tragedy.

We convinced ourselves that one rooster in a coop would be peaceful, but the hens remained unnerved. It turns out that a rooster that survives two attacks by dogs and battles for his life ends up the cock-daddy, menacing prick of all roosters. Now that he was older and saltier than ever, I had to carry a metal rake and saddle up for combat just to collect eggs. Changing the water required agility, excellent peripheral vision and quick reflexes. This rooster brought out a serious rage in me, but not as much rage as he inspired in my older sister.

Sarah reluctantly agreed to feed the roosters while I spent the night at a friend’s house. Upon my return, she informed me that she had not fed my chickens that morning because my “horrible rooster” had attacked her. In a terrifying rage, she ran out of the pen and shot staples from the staple gun to watch him dance. My tearful rant of injustice had no effect on my family. The combination of my relentless determination and my dad’s love of animals had turned him into a doormat dad, and our family was off the rails.

Somehow I convinced my brother to help me build a fence that kept the rooster separate and enabled me to feed him safely. As big and fat as that rooster grew, he managed to jump over the five-foot fence and surprise me without my rake. When I added some height to his fence with chicken wire and the handy staple gun, I could hear that ungrateful old codger back there trying to leap up to show me who was boss. It was uncanny how he outlived all the hens as well as our next round of hens.

Finally, one cold, dark winter morning, there was an eerie silence behind the wall. I found him dead and frozen solid in the corner. After years of fighting for that crazy rooster’s life, I calmly put that stiff old guy into a garbage bag and placed him in the dumpster with a sigh of relief. As I headed off to the bus stop, I caught sight of the staple gun resting on a stool near the coop reminding me of how a single tool had prolonged the agony of my own foolish righteousness.