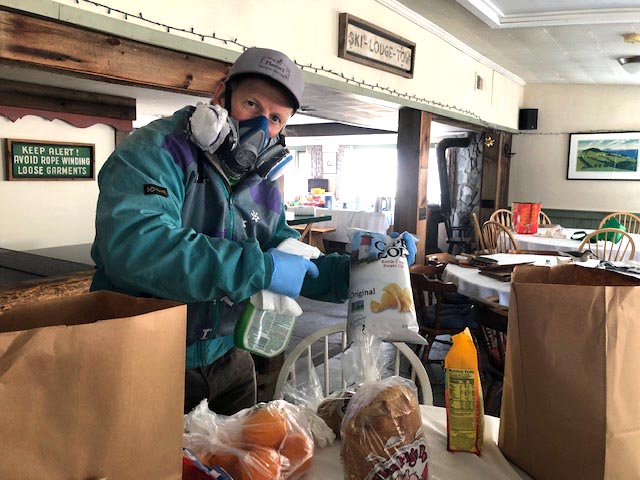 Bruce and the chips

It takes a Pandemic and about a week of quarantine to be reminded of the latent traits of family members. Bruce and I have been married for almost twenty-four years, and it turns out he is a full-on germophobe. As an innkeeper, he is vigilant in the kitchen; he has always required the servers to wash hands for twenty seconds, which he learned in his Safe Serve class years ago. He has had signage to reinforce the message for over a decade. Who would have thought that Bruce would be both a sloppy disorganized guy as well as a guy who follows us around with a spray bottle of Chlorox?

To be clear, I do not possess the tidy gene. A number of friends and relatives offer to “help” me clean our family zones and suggest that we should be on a TV hoarder show. My traits live on a different planet than Bruce’s. He wins the sanitation game every time, but I am super organized and my clutter is more manageable than his. 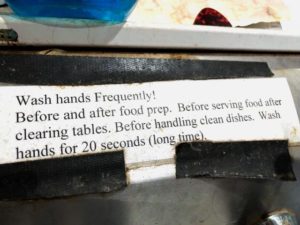 Bruce’s kitchen is where hand-washing rules meet the standard of the State of NH law, but twenty yards down the hall, his personal stuff is dizzyingly jumbled on his tool bench and puking out of his mudroom closet. I have always wished that his kitchen vigilance would leak just a little bit to other zones in our house.

Luckily Bruce is really funny because living with a disorganized guy can be exhausting. He is always searching for things, sifting through piles and harrumphing about lost checkbooks or a missing wallet. He claims they are not “lost” because they are eventually found almost every single time. Life is busy at Pierce’s Inn, so there is always a reason to not keep our personal zones orderly. Preparing the Inn for an event, hosting people or cleaning up after people depart create a constant demand of things to do. Therefore, our family spaces unravel regularly. Bruce’s overstuffed and overwhelming zones are a low priority, because he is busy innkeeping, taking care of the facilities or needing to bike or play hockey after a stretch of hard work. I am in full support of self-care.

I developed an addiction to organizing self-help books, optimistic that we could regain some semblance of order. Bruce looks sad and defeated when I read compelling passages from Clearing Your Clutter with Feng Shui: FREE Yourself from Physical, Mental, Emotional and Spiritual Clutter Forever by Karen Kingston. He has a full quiver of deflection lines that always make me laugh such as, “I would clean my stuff, but I am from a broken home.”

When I carefully fold my socks rather than rolling them into each other thanks to Marie Kondo’s The Life-Changing Magic of Tidying Up, Bruce thinks I am showing off. I relay Kondo’s theory that socks work hard all day and deserve some lightly folded rest. He says he and his socks don’t agree, evidenced by the dozens of cotton socks he keeps around from the 90s in case of a…pandemic? By the way, when everyone else was hoarding toilet paper in March, Bruce was scrambling through the grocery store, masked and gloved before it was required, buying many pounds of coffee beans and way too many cans of chickpeas.

After I turned fifty, I recognized that I would need to slay some organization dragons without Bruce’s help to avoid burdening our kids. When you are storming down the back nine, it is time to get your act together. I was recently given a book devoted to the idea of shedding stuff before you die to spare our kids the burden of our crap. Time is of the essence when one is drifty over fifty. The Gentle Art of Swedish Death Cleaning: How to Free Yourself and Your Family of Lifetime of Clutter by Margareta Magnusson is the final book in my clutter-conquering trilogy. Bruce blames the arrival of the Swedish death cleaning book for anything that is missing.

When we entered the Collective Pause of COVID-19, I put my energy into organizing the many zones we had put off for years. I took down the mudroom, the storage room, kids’ schoolwork and artwork, the utility closet, the kitchen and my desk. Bruce made himself scarce when he felt my productivity building to a frenzy. When forced to enter a cleaning zone and to walk around my designated piles to toss, giveaway, keep or move elsewhere, he would say, “You’re hurting my feelings!”

Bruce felt particularly judged when I insisted he join me in some cramped storage zone to review his collections, demanding he choose to let some things go. He clutched his two Dartmouth Nordic jackets (circa 1995) when I suggested we pass them along. He literally whined when I pointed to several pairs of stiff unused ski gloves from the 1980s. The old, ill-fitting helmets inspired a classic hoarder’s line, “You never know if we may need these some day!”

Whenever I get up in Bruce’s grill with my bossy tone of supreme cleaning badassery, he makes this scrunchy sideways sneer, starts rolling his fists in a playful way and musters his mocking tone with, “You’re making me randy again.” I collapse in laughter every single time. He is the master of deflection, but when the ski areas and hockey rinks closed and I caught him under the influence of four cups of coffee, I wrangled him into cleaning his desk that had become unusable as a vertical closet where he stored anything and everything. Nothing gets my motor running more than Bruce cleaning his desk.

Bruce may not be a jolly organizer, but his strengths shine as the Captain of our Quarantine Team. He spent the first few weeks following us around and aggressively sanitizing every surface we touched. Bruce adopted the recommended safety habits early. We have stayed healthy because he does all the grocery shopping. He doesn’t trust that we would be as vigilant out in public and wouldn’t be thorough enough sanitizing groceries when they come into the house. When Bruce returns from the store, the groceries are quarantined for several days in our cold zones and wiped down again before they come into the kitchen.

Suddenly we are fully reliant on our handy germophobe, grateful to have him setting the Quarantine rules. When the groceries get low, the rest of us toddle around in search of our foods. And smack dab in the middle of the kitchen sits Bruce, sipping his third cup of coffee, wearing his faded Dartmouth Nordic coat, doing a crossword puzzle and smugly opening a can of chickpeas.

6 thoughts on “The Stealth Germaphobe”