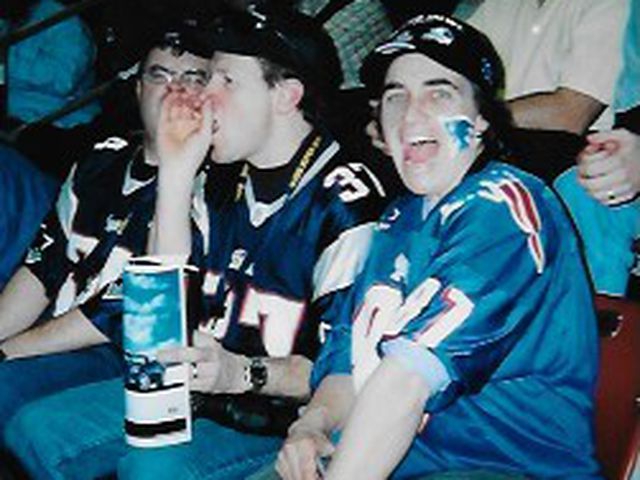 My Path to Super Bowl XXXVIII in 2004

Before Tom Brady was a household name, I went to the movies on Super Bowl Sunday. When Super Bowl XXXVI rolled around, I was glued to the tube after developing a fascination with Tom Brady and the New England Patriots during the playoffs. During Super Bowl XXXVIII, I was wearing a Patriots jersey, a Super Bowl hat, and a Patriots symbol painted on my face. And I was miraculously in section 319 of Reliant Stadium watching one of the greatest games in NFL history (even though my direct knowledge of that history was sketchy at best).

My husband Bruce had been a diehard fan for some time. I had not been a consistent NFL fan, but Tom Brady changed all that. Our goal had been to attend a New England game at some point during the Brady era. The Universe aligned when our friend Mike O’Malley invited us to join him at the Super Bowl in Houston.

Despite the fact that we were under pressure to finalize kid care and travel plans, Bruce spent the time planning his outfit. It was clear that I would be flying to Houston with Captain football geek fan – a forty-year-old 5’9_, 155-pound armchair quarterback, armchair coach, armchair running back, armchair receiver, armchair safety, armchair lineman and armchair commentator.

It took energy to live with a guy in a Patriots jersey all day every day. While I was busy getting organized, Bruce would drift off into his imaginary NFL world acting out plays as Tom Brady. He assumed an athletic position with his legs rotated so he could drop back, look for an open receiver, and fire the imaginary wonder pass. Whenever he came upon one of the kids’ footballs he would pick up the ball, yell out the snap count and pretend to blast it off to Troy Brown, David Givens, Deion Branch or Bethel Johnson. He would follow it with a cocky head swaggering strut after the touchdown. It was funny the first few times, but we had a punch list to get through.

When I heard Bruce yell, “OHHH NOOOO.” I ran to the kitchen ready to put out a fire. I found him backed up from the table displaying the nearly devastating evidence of partially chewed food smeared on his jersey. The old quarterback had been so lost in thought about his next play that food dropped out of his mouth onto the sacred cloth. When I suggested he throw it in the washing machine, he scolded me for considering such sacrilege. He did a careful spot cleaning and stored the jersey up high until he had finished his carb-loading for the next series. To get anything done, I had to skirt around this man jogging, cutting, dropping back and sprinting around the kitchen in his jersey. The kids didn’t even notice this as odd. They continued their conversations with him while he scooted around. Then they started to scoot around.

By the time Bruce and I were packing our bags to be O’Malley’s squash-on Pats fans for Super Bowl XXXVIII, we were both exhausted and fired up. A committed fan and his wife (who had only recently started to understand and respect the nuances of football) were off to Houston. My passionate reading of articles about Tom Brady during his first two years had helped beef up my general knowledge. In fact, when I got a little tired of the cut, jog and pass routines that Bruce had going, I fantasized about the real Tom Brady taking the snap in our kitchen. I could picture him stepping back sideways in that slow slightly pigeon toe way of his and calmly making a complete pass across the box of Cheerios.

If Bruce didn’t take it down a notch on his football obsession, I was going to put a bid in for Tom Brady as my number one pick in the husband draft. Tom Lusty Big Gun Brady could call out plays, make touchdowns and scoot around my house all he wanted. I am certain Brady’s combination of athletic talent, sex appeal, and humility is at the highest level to ever grace professional sports. Even though he is a very special guy, I don’t think Brady could make pesto pasta or roasted potatoes just the way Bruce does so the kids love them. And he certainly couldn’t clean toilets half as thoroughly as my co-innkeeper. And he could not possibly be as spontaneously hilarious as my man Bruce. I decided to keep my cut-jog-pass guy around, but I considered hiding that jersey once a week to reduce the playmaking, so we could get some work done.

Super Bowl Big Stuff Bruce and I were in Reliant Stadium for the huge game. On top of the history-making win, the human study of the whole weekend was a feast. Patriots fans outnumbered Panther’s fans by the ten thousands. I was part of this great pulse of fans that was channeling positive energy to Tom Brady and the Pats. After the dramatic win and our tears were wiped away, I got the sense that Bruce held this experience up there with the births of our three kids. He was totally depressed on the plane ride home on Monday after it was all over. On Tuesday, he took our two-year-old Colter to gymnastics and had to roll around in the chalky Styrofoam filled pit with a bunch of snotty nose rascals. He was particularly salty on Wednesday when he returned from his Super Bowl report at Rotary to an afternoon of vacuuming. I had hoped that jersey would retain its power for him for a few days. At least you take home a baby after it is born. The good news is that the jersey wouldn’t be waking us up at night.