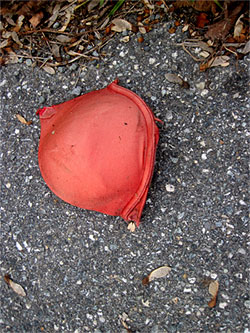 A couple of months ago, I was out for a run and came upon a single, red bra cup on the side of the road near an old farm. It was just one sheeny B-cup fading in the sun on the side of my road. In fact, it was close to the color of a newt passing by the cup on its way towards the woods.

The oddness of the lone cup struck me and made me wonder what circumstances led one cup of a sassy bra to make its way to a rural road in Etna, NH. Over the years, I have run across a lot of discarded, soiled underwear and a few socks, but I have never seen a bra – much less one cup of a bra. I posted my sighting on Facebook, and the responses were clever and hilarious. They went on for days. I laughed a lot.

I assumed that some perma-Green Up Day neighbor would pass by and pick it up like a piece of litter, but it hung around for weeks and weeks. Because I am training for a marathon, I see the cup on my way home most days whether I am on a four-mile run or a fourteen-mile run. With a little extra time to think about any thought that passes through my head with all the training, it became the official marker of 1 ¾ of a mile left until I got home. I rely on the cup to provide me with a mental victory of getting over the hurdle and to keep clipping along towards home.

I imagined the cup getting pushed by the first snowplow to the side of the road and surfacing in April when the snow melted. I was so attached to my visits, I named her Victoria. I was actually hoping she would be around when I started running the next spring. My dependency on seeing Victoria started to grow. Edie, my running buddy had been injured, therefore Victoria had become my training partner. It seemed harmless at first, but one day I realized my mind may have tipped a little into a quirky or even sketchy range.

I was getting a bit like the Tom Hanks character in the movie Castaway who was attached to Wilson the volleyball. This became startlingly apparent the day I could not find Victoria. I stopped dead in my tracks and looked all around. I thought I had forgotten where she hung out, so I backtracked to no avail. I was feeling a little gripped and oddly abandoned. I was also aware enough to mark this reaction as a possible red flag for my state of mental health. Just as I was starting to talk myself into a more rational state, I spotted her off the road in the grass out of the corner of my eye, and I was back in Wilson territory full throttle. Relief filled me up. Perhaps I had been running just a few too many miles to keep perspective. I promised I would let this go soon.

She was safe in the long grass. I wondered if someone threw her there or if the wind wafted her there but the chances of her being around through my marathon training were looking good. A few days later, I noticed her tucked into some read leaves. On my first run with Edie back from her injury, I introduced her to my new friend. Edie wasn’t threatened and refrained from openly judging the oddness of this thing. Victoria’s chances of staying put throughout the fall were looking even better. Little did I know that before Halloween, a snowstorm would hit. Victoria is now protected for a little while under the snow.

On the day of my last long run. I was on mile 11 of 13. I glanced at her spot and didn’t see her. It didn’t seem wise to stop for anything to lose my gusto for the last 1 ¾ mile, but I had invested too much to not investigate. I paced a bit but didn’t see her. I used my usual landmarks to dial into her hangout, but she was nowhere to be found. By this time, I was in the wet grass searching with my feet and hands. Pathetic, I know. Weird indeed, but Victoria had been my beacon. As I stepped out of the grass, I spotted her by chance. I almost picked her up and brought her home to hang above my computer for safekeeping until I had run the marathon, but I resisted. If Victoria makes it until the marathon, I will bring the lass home and give her a proper display. After all, she has done so much for me.