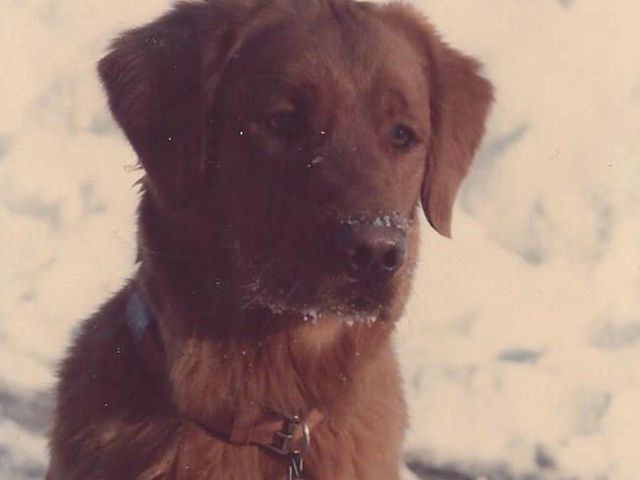 Borderline fiascos seem to be a consistent theme for hosts of weddings. My parents hosted a lot of weddings at Pierce’s Inn in the Seventies and Eighties. Cooking and serving a meals for eighty people is a recipe for disaster in itself. When you add in the fact that a couple celebrating one of the most important days of their lives expects a seamless event, pressure builds. Family tensions among the guests are also magnified by weddings.

A collision of fortunate factors aligned to help my family and our team of servers narrowly avoid a wedding reception disaster. Because it was a beautiful day, every single guest was out on the lawn enjoying cocktails and appetizers gazing at the view of Vermont. Within a hundred feet east of the guests, the preoccupied kitchen staff didn’t see our floppy, inbred Golden Retriever named Benson meander through the kitchen and into the dining room where he sniffed out the five-tier wedding cake. A server caught sight of him out of the corner of her eye just as he reached up to bite a solid chunk of cake off the first tier. Benson got a second chunk gobbled down before she could grab him and steady the teetering table that held the cake.

The server dragged the dog to the kitchen and tearfully announced to all of us in the kitchen that Benson had just taken a giant bite out of the wedding cake. Fortunately, my dad was outside filling ice buckets and slicing lemons and limes at the bar. He would have blown his top or collapsed. Similar to my dad, my brain was in a constant struggle to tamp down the tweaks and distractions that clattered around my head without external input. An incident of this measure felt like jumping into a volcano with a stick of dynamite. A serious cringe started to brew in the pit of my stomach as I washed the dishes.

We all turned my reliable mother who had always helped us refocus after an emergency and direct us toward solutions. This time, however, she stepped away from her pots of cheese soufflé with an expression of shock and defeat. Two of the servers started to cry. I was so overtaken by the hopeless vibe filling the kitchen that I left the sink and curled up on the couch in the other room.

My sister Sarah had earned a reputation as capable of fixing almost anything at Pierce’s Inn. At fifteen, she was not only known for her skills, but she also had uncanny focus and calm when disasters stuck. Recognizing the dire situation, she quietly locked into combat surgeon mode.

Sarah brought the cake into the kitchen out of sight of the guests and retrieved a jar of extra frosting miraculously left by the baker. As soon as my dad entered the scene and grasped the situation, he started coiling in his freak mode. His massive inhalation and explosive anger rattled my mother to her senses. In one bursting sentence, she redirected the servers and ordered my father out of the kitchen before his toxic panic drained the last drops of hope. He joined me in the back room where we both writhed uncomfortably. My dad paced while scolding Benson who panted contentedly with smears of frosting on his snout and speckled in his whiskers.

Sarah quietly set up shop with a selection of knives. With impressive efficiency, she sliced off the damaged and contaminated section of the cake and frosted the flat section with finesse and artistry. She cleverly placed the cake in the corner of the dining room concealing the funky, uneven side of the cake just as the guests entered the dining room to sit down for dinner.

When the happy couple stood to cut the cake, Sarah lingered close by. Once they had fed cake to one another, Sarah shimmed the cake around so she could carry it to the kitchen with the sketchy side facing her. The kitchen crew cut and served the lower tiers of the cake without anyone ever knowing what had occurred.

That near miss inspired my parents to rely on Sarah more and more as time went on. She became the resident problem solver, baker, cook, mechanic, decorator, and troubleshooter at Pierce’s Inn. Then Sarah grew up, went to college and moved away. She is a mom of five who has added to her repertoire. When she started fixing and installing appliances, I started calling her MacGyver.

Pierce’s Inn would not be standing if it weren’t for the contributions of all of my siblings and siblings-in-law over the last few decades. Sister MacGyver continues to be a regular savior with sewing projects, repairs, meals and much-needed décor boosts. On multiple occasions, I have failed to thoroughly defrost our Thanksgiving turkeys to serve my thirty-five family members. Each time we discover the situation on Thanksgiving Eve, I have to leave the kitchen in a complete state of coiling panic just like my dad. MacGyver always kicks in, channels our mom’s calm and wrangles those turkeys into a delicious Thanksgiving meal just in the knick of time.