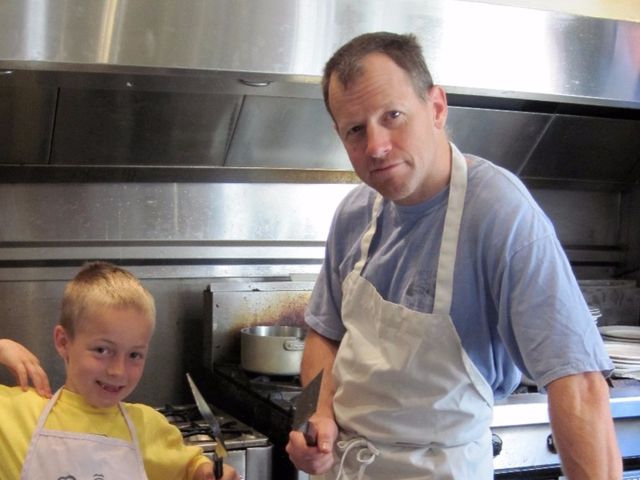 The Handy Husband teaching our lad to sling pancakes

Living and Working At a Scrambling Pace

Bruce and I carefully considered all the warnings before we took over Pierce’s Inn. Having witnessed a number of divorces in our own families, it was clear that marriage takes work without owning an Inn. We were surprised by how well we had managed life’s transitions and challenges up until that point, but running an inn together seemed like a whopper of a challenge.

I had the good fortune of watching my parents run Pierce’s Inn for thirty-one years. They handled conflicts and challenges with humor, courage and grace. Whether they were up against decisions about finances or what time to put the potatoes in the oven, they addressed their differences directly. My parents had a uniquely healthy marriage. Bruce and I consulted a counselor and our many wise people to explore how we might keep the family ship steady through the inevitable choppy waters of running an inn.

Groups usually stay at Pierce’s Inn on weekends, and the midweek days are used to prepare for the next group. We entered our innkeeping adventure in the eye of the parenting storm with three children, ages eight months old to four years old. In retrospect, already living in a state of nuttiness served us well even as the madness notched up five or six levels. We were so busy surviving that we didn’t have time to reflect as we scrambled to pull the next thing off.

My initial vision of innkeeping was to get the place fully cleaned and dialed in on Monday so that we could have leisure and be less fazed when unexpected setbacks occurred. Bruce’s idea was to enjoy the time off and start preparing on Thursday with the bulk of the work being done Friday before the guests arrived in the afternoon. Bruce thought my Monday plan was neurotic. Going with Bruce’s Friday plan put me in a complete state of neurosis by Friday morning.

Being in charge of housekeeping, cooking and maintenance allowed us to spin our daily minutiae into major achievements. Aside from our timing differences, we were both particular about how things should be done. We bickered about how he left the bed skirts askew and how I executed inferior, less thorough toilet cleaning. We decided to divide the housekeeping tasks up to minimize disagreement. I took on beds and laundry. Bruce took on toilets and vacuuming.

Housekeeping began after the kids were in bed and usually took until midnight. If I decided to crank my tasks out on Tuesday night, sometimes Bruce would reluctantly saddle up to his bucket of cleaning supplies to tackle the bathrooms. In and around our lengthy conversations, we would get some jabs in about who was the better housekeeper.

Most weeks, Bruce would putter around on Thursday then kick in high gear Friday morning with the clock breathing down his neck. After a few unexpected disasters on Friday afternoons during his prime time, he was open to a new plan. Frozen pipes, a broken furnace and a flooded dining room backed him against the wall enough times that even he felt it was too much for his emotional wellbeing. Wednesday became our housekeeping day, but Bruce still managed to find distractions on the day of big events.

One night he decided to install an old TV in the kitchen, so we could watch the Patriots game while we worked. With sixty-five people arriving in a matter of hours, Bruce went on the hunt for sixty-plus feet of cable and a couple of rolls of duct tape to connect the kitchen TV to the satellite where the guests would be gathering. Instead of spending energy trying to deter him, I buckled down to make up for his absence. SCal, our main server – even as a huge Pats fan – was aghast. She frantically begged him to focus on the immediate needs in the kitchen. Somehow we prepared the meal without Bruce and enjoyed watching the game.

There are thousands of things that need to be fixed or changed at Pierce’s Inn. A broken support board on our Ping-Pong table was a very low priority on our to-do list and had been neglected for four years. On a night when we hosted a large group and were low on servers, our small team put our effort in high gear to get the food prepared. Just when we needed him most, Bruce disappeared,

I found him under the Ping-Pong table building a new support board. I calmly suggested, “Bruché, we are a bit behind with the meal prep, table setting and dessert making. Any chance you could help us in the kitchen rather than tackle this unnecessary project right now?” Without missing a beat, he responded, “Pinzy, if I didn’t do all the sh%* I do when I am supposed to be doing something else, nothing would ever get done around here.” And that, people, is how we find balance and humor in the most stressful times at Pierce’s Inn.